At the end of February 2020, the FlowerPower project officially came to an end. Having said that, there is still significant work ahead in the form of end reporting, financial accounting and so on. Also, the scientific insights gained during the course of the project will give rise to further research and the relationships built to future cooperation. Indeed, further research and cooperation are already in planning.

With the project over, the ESRs are also starting to look to the future. ESR1 has currently an internship at a leading European breeding firm. ESR2 will start in his new position at a plant breeding company on 15th May. ESR3 was actually the first to be offered a position. She is now at a well established pharmaceuticals company in her native Italy. ESRs 4 and 5 have both been offered positions at B1, where they wil finalise their PhDs and continue their research. ESR6 has similarly been offered a position at B3, where she will also finalise her

Beneficiary 1 organised and hosted the final meeting for the FlowerPower project at the Technische Universität Wien on 24th and 25th of February 2020. The meeting offered one last opportunity for all members to sit down together and discuss results, as well as make plans for future research arising from the project. 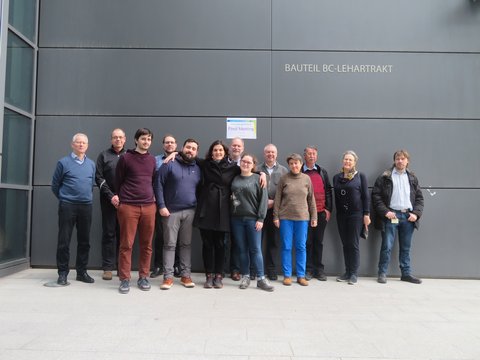 While holidaying in El Hierro, our fearless project leader spotted these:

The seventh biannual meeting was organised by Partner Organisation 3 in Helsinki on the 18th. By all accounts the meeting was especially interesting, since at this late stage of the project results are coming in thick and fast.

Also, FlowerPower was once again represented at this year’s iteration of the European Researchers’ Night in Vienna. The event was particularly well attended this year and the FlowerPower team was able to garner much interest.

FlowerPower was also represented at the workshop “Molekulare Züchtung”, organised by the Gesellschaft für Pflanzenbiotechnologie” in Geisenheim, Germany. FlowerPower was represented by ESR1, who presented a talk titled “Anthochlor Pigments – Engineering of Yellow Flower Colouration”.

Lastly, ESRs 5 and 6 represented FlowerPower in Trento, Italy at the 10th International Workshop on Anthocyanins, where both presented posters on their work. 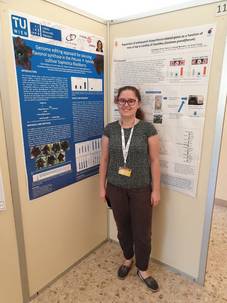 ESR3 is the first to secure a job. She leaves us for Novartis in Bari, Italy, where she will surely enjoy a stellar career. She is currently in the process of finalising her dissertation.

ESRs 2 and 5 have both been offered more permanent gainful employment at their respective host institutions, where they will also finalise their PhD theses.

Klemm + Sohn hosted the three year meeting at their facilities in Stuttgart, Germany. Once again the ESRs impressed with their progress, with several of them winding up their contributions to the project.

The fifth biannual FlowerPower meeting was hosted by the University of Vienna at their facilities in Althanstraße. Once again all ESRs presented the latest fruits of their labours and by all appearances several major breakthroughs for the project seem to be just around the corner. 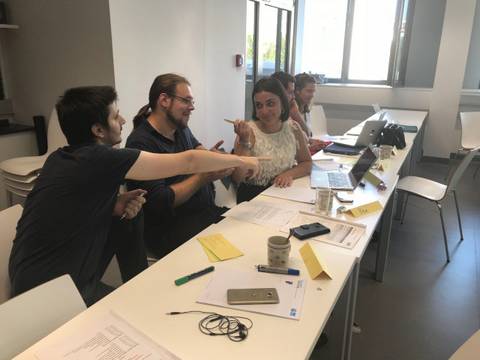 The fourth transferable skills seminar was held at TU Wien. This seminar was focused on career development skills. Ms Daniela Haiden-Schroll presented such topics as: Crafting CVs and Motivation Letters, Job Interviews and Self-Presentation. The seminar was well received by all in attendance. 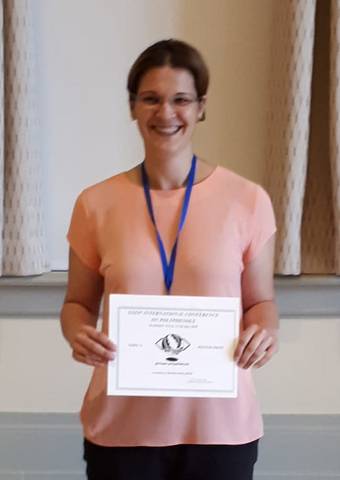 FlowerPower was strongly represented at this prestigious biannual conference, with ESRs 3,5 and 6 giving oral presentations, and ESRs 1,3,5 and 6 presenting posters on their work. FlowerPower was well received and garnered much interest. Indeed, ESR6 won the prize for the best poster! Everyone at FlowerPower is very proud of her! All in all the project’s public visibility was greatly increased by the ESRs’ and supervisors’ participation in this conference. 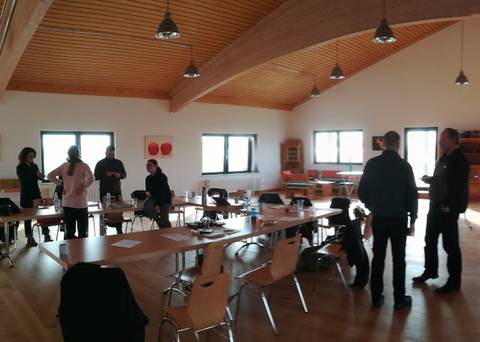 TU München hosted a very productive meeting at their beautiful facilities in Freising-Weihenstephan. All beneficiaries and partner organizations were represented at the meeting, giving an excellent opportunity to discuss progress made to date, as well as plans for the future of the project. 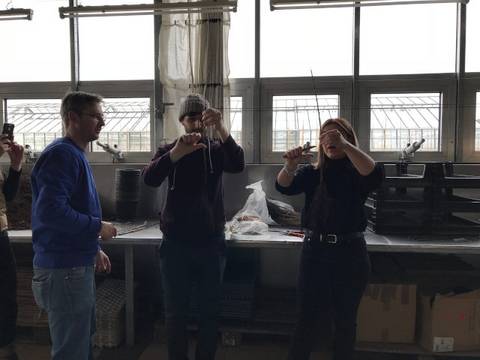 The fourth scientific school was hosted by TU München, at their facilities in Freising-Weihenstephan. Once again this school incorporated a mix of theoretical and practical components, covering such topics as: woody plant pathology, vegetable quality, control and optimization, viticulture, chemical genetic approaches in plant science, carotenoids and plums, online cut flowers, fruit storage, and grafting of plants. 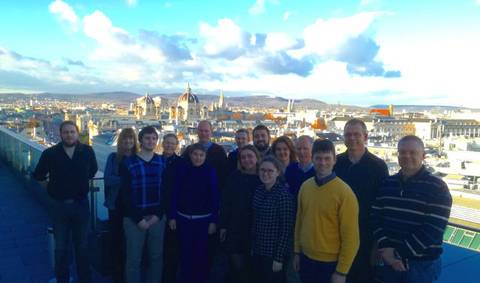 In preparation for the Mid Term Report, a meeting was held at TU Wien. During this meeting the REA was represented by Dr. Federica Rossi, senior researcher at the Italian Research Council. During this meeting consortium members had the opportunity to present the progress made. The report was well received and garnered overwhelmingly positive feedback. 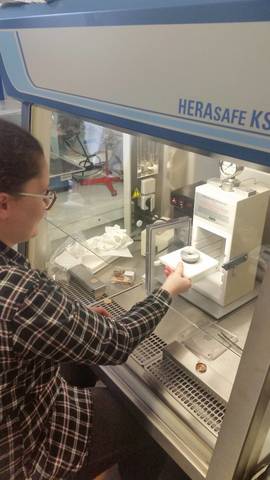 The third transferable skills seminar was organised and hosted by Leibnitz University at their facilities in Hannover. Dr. Darren Foster provided the ESRs with training in: opening and closing presentations, signposting and transitions, pronunciation, visual aids, as well as interacting with international audiences and fielding questions.

The Gesellschaft für Pflanzen Biotechnologie anf the Julius Kühn-Institut jointly hosted a workshop on molecular breeding in Braunschweig, Germany. ESRs 1 and 2 each delivered a presentation, titled ‘Genes of the Athochlor Pathway are a Rich Source for Engineering Yellow Flour Colouration in Ornamentals’ and ‘The Molecular Basis for Bract Colouration in Orange Christmas Star’, respectively.

The Bioinformatics School was organised and hosted by the University of Vienna this month. The school was attended by 15 people, including three instructors, and covered topics from basic linux commands to more advanced scripting specific to the research being conducted within the FlowerPower project. By all accounts the school was very informative and enjoyed by all.

ESR1 was presented with his award for his interactive presentation at the European Chemistry Thematic Network Association. Everyone at FlowerPower is very proud of his achievements. 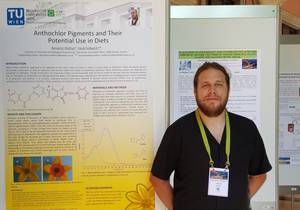 ESR1 presented a poster relating to his FlowerPower research, titled ‘Anthochlor Pigmets and Their Potential Use in Diets’ at the International Society for Antioxidants in Nutrition and Health’s (ISANH) 11th International Conference on Polyphenols Applications, which was hosted at the University of Vienna.

After their well-received contribution last year, FlowerPower was invited back for the next event, to be held 29th September this year. Our members are honoured by this repeat invitation and look forward to once again engaging with members of the interested public. Further details regarding this excellent event are available at: http://www.be-scienced.eu/.

ESR1’s entry to the contest placed second with 69.25/100 points, only 0.15 points behind the winner. The FlowerPower team is very proud of his achievement and congratulates him most sincerely.

The first year meeting was organised by Beneficiary 2 and hosted at their facilities in Stuttgart, Germany. In attendance were 15 people, including all six ESRs. The meeting served as an opportunity for ESR6 to formally introduce herself to the FlowerPower team and for all ESRs to update the FlowerPower community on the progress of their respective research. In addition, all necessary administrative issues were discussed.

As part of the FlowerPower outreach activities, ESR1 participated in the contest on digital teaching organized by the European Chemistry Thematic Network Association with submission deadline January 15, 2017. He prepared an interactive presentation aimed at providing knowledge about the flavonoid pathways and the relevance of anthocyanin pigments to agricultural, plant science and nutritional science students. You can view his contribution (and those of his competitors) at http://econsc.chem.auth.gr/contest/. Our fingers are crossed for ESR1.

This month ESR6 starts her research at beneficiary 2. We welcome the new FlowerPower team member and look forward to her contribution!

This month saw the planned plant breeding school held at Stuttgart, Germany. The ESRs followed an interesting programme that contained a well-balanced mixture of theoretical classes and practical training. Martina Kolarek, just recently selected ESR6, was invited to join the Plant breeding School prior to her contract start. Thus the team of ESRs is now complete and she obviously enjoyed her time in Stuttgart! 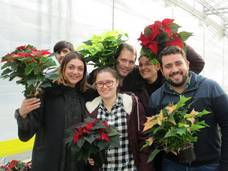 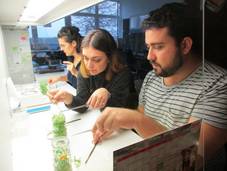 This month ESR 1 starts his research at TU Wien. We welcome the new FlowerPower team member! 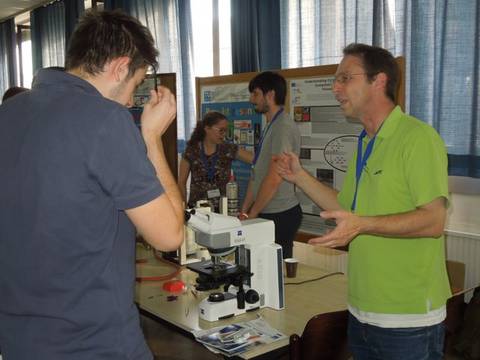 Teams from beneficiaries 1 and 4, including ESRs 4 and 5 presented to the interested public at the European Researchers Night information about flower colour, the health benefits of polyphenols as well as about transcriptome studies. Visitors could perform experiments demonstrating flower pigment allocation under the microscope, a demonstration that white colour is based on air not on pigments, and pH dependence of anthocyanins based colour. This event and the involvement of the FlowerPower project was even covered by the local radio station “Radio Wien”. All in all the FlowerPower project was well received by the interested public, resulting in an invitation to participate again in next year’s event.

The kick-off workshop was held in conjunction with the meeting, including transferable skills seminar 1: research management. An interesting programme including a scientific introduction to the FlowerPower scientific topics, an introduction tp project management, IPR protection and many more was offered to the ESRs.

July 11-15, 2016: FlowerPower participated in the XXVIIIth International Conference on Polyphenols 2016 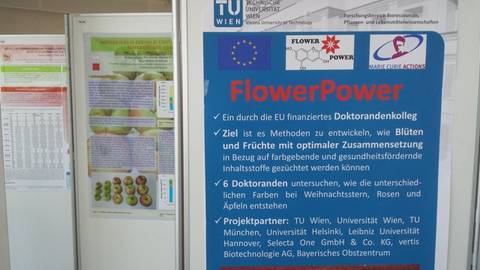 The FlowerPower Project was well represented at ICP2016 at TU Wien in Vienna, Austria.

Members of the FlowerPower community contributed to three posters:

The FlowerPower community was bereaved by the sad passing of Dieter Treutter at the beginning of this month obstbau.wzw.tum.de/index.php. With Dieter, FlowerPower has lost a passionate researcher, a steering scientific project manager, a committed team leader, an encouraging supervisor, and a loyal colleague.

Although D. Treutter cannot really be replaced, we managed to ensure the project’s success and necessary supervision with some rearrangements of the supervisory team at TUM. Without him, FlowerPower will never be the same again than it was before. To us he will stay always a FlowerPower team member. 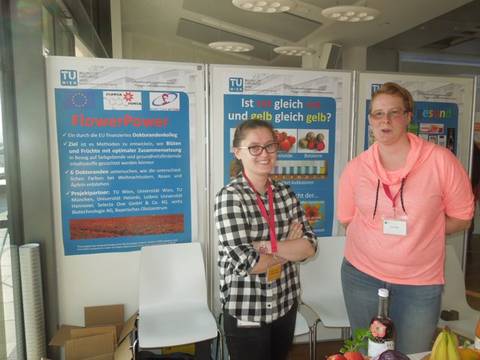 As part of our outreach activities, a team from beneficiary 1 including ESR5 presented to the interested public information about flower colour, health benefits of polyphenols and the project FlowerPower at the “Lange Nacht der Forschung 2016”.

This month ESRs 3, 4 and 5 start their research at their respective host organisations. We are looking forward to their contributions!

The kick-off meeting was held in Freising on March 3 and 4, 2016. The meeting was attended by 13 members of the FlowerPower community from seven of the eight beneficiaries and partner organisations. The agenda served as a first meeting of the project team, as well as to introduce the teams and the project. Administrative issues and all necessary details of the work plan were discussed.

The meeting also saw the introduction and adoption of the FlowerPower logo:

The FlowerPower project has started.

The website was already launched in December 2015, and recruitment of ESRs has been ongoing since October 2015. It will foreseeably continue until November of this year.